I got this txt from Mike. This is Ruby – the last of our 3 heifers to calve… We knew her calf would be born within a few hours, just didn’t know if she would require assistance or not. Needed to watch and wait…🙏🏼

I finished up what I was working on and headed up to the field to get a couple pictures for myself. She had progressed a little – you can see feet sticking out! But she was hungry, so she just kept eating, lol.🙏🏼 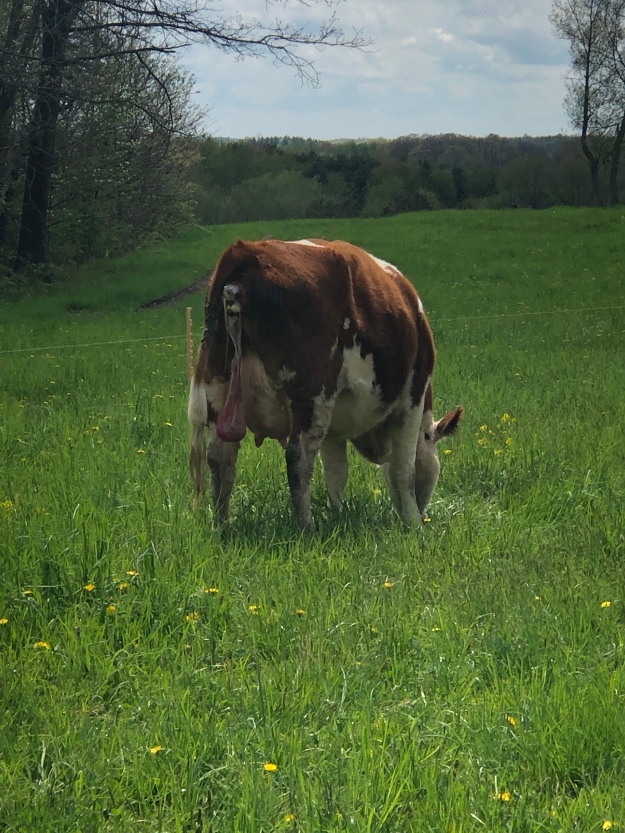 Ruby was laying down and beginning to push. 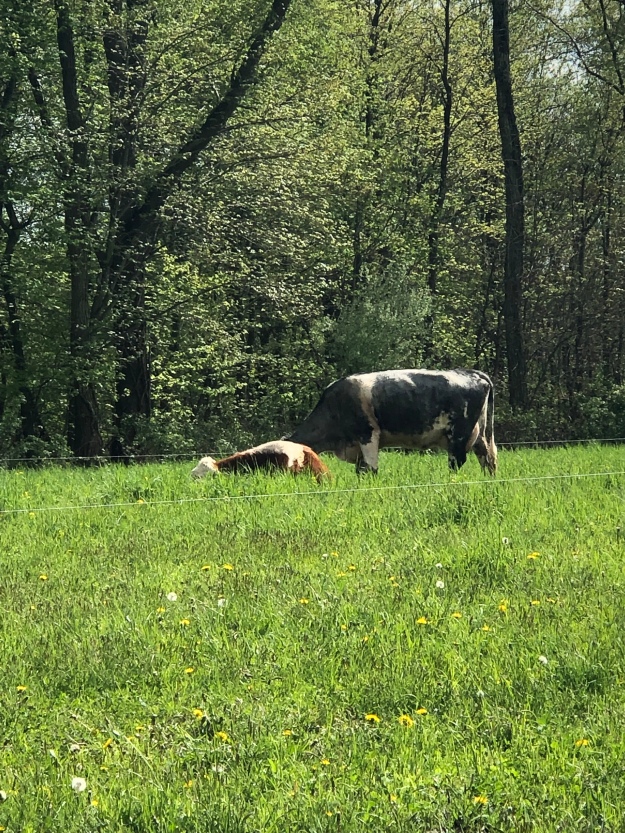 We waited around/watched for the next 40 minutes or so. Got to listen to a lot of grass chewing, lol…

And she didn’t want Mike to help speed things up! The other 2 heifers: Peggy & Nat, came over to throw some interference, lol…😂

As I’m taking pictures and videos of all this with Ruby, all of a sudden I hear a weird noise behind me. I turn around to seeing Gluey laying on the ground and pushing for a few seconds and then she popped up and started eating again. I asked Mike if he thought maybe Gluey was going to have her calf today, too?🤔🤷🏻‍♀️ Time would tell…

Decided that since Ruby didn’t appear to be in distress, we would head down to get a drink and come back up in a half hour or so.

Found BOTH Gluey AND Ruby with calves, lololol…😆 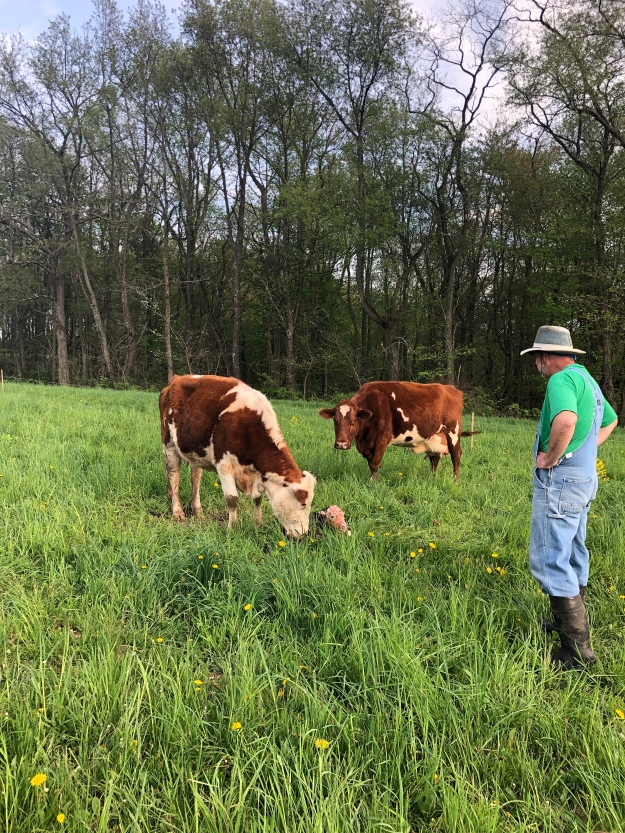 Wow. So funny how some labors take hours and others just minutes!😲 We could tell a rain shower was headed our way, so we decided to let the mamas clean their babies up, grab a quick sandwich from town, and then come back up to assess the situation after the rain rolled through. 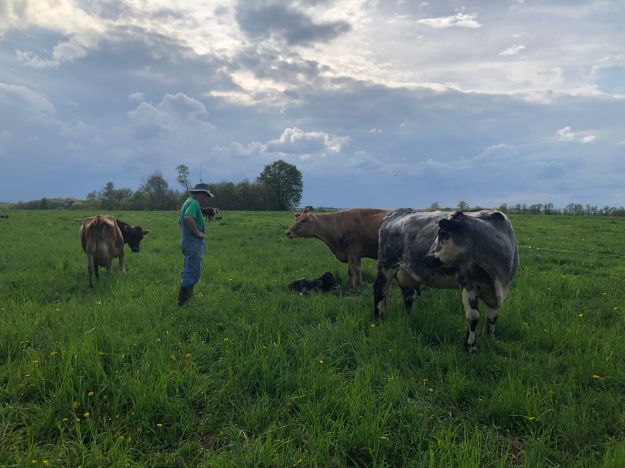 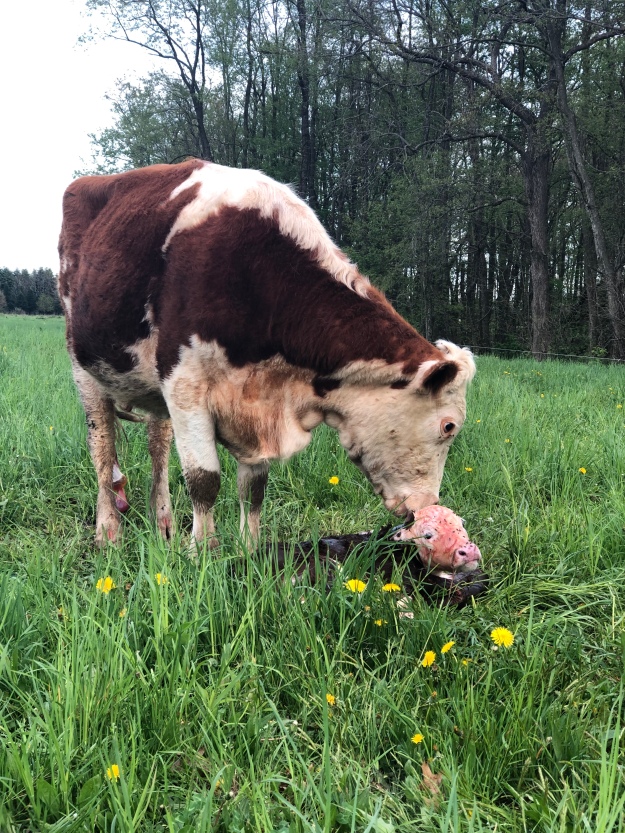 It’s a boy! This is Ruby’s first calf for us. [Click here to read about when Ruby was born.] His name is Boy-o. A name from a movie my boys have memorized lines from. Kind of fun to attach it to a calf now, lol.😂

This is Gluey’s 9th calf for us – her 5th boy. [Click here to read about her calf last year.] Gluey is always cracking us up because she kinda looks like a cartoon cow – sorta clownish.🤣 We’ve often said she reminds us of Jar Jar Binks from Star Wars… Therefore, we’ve named this boy: Jarjar.😎 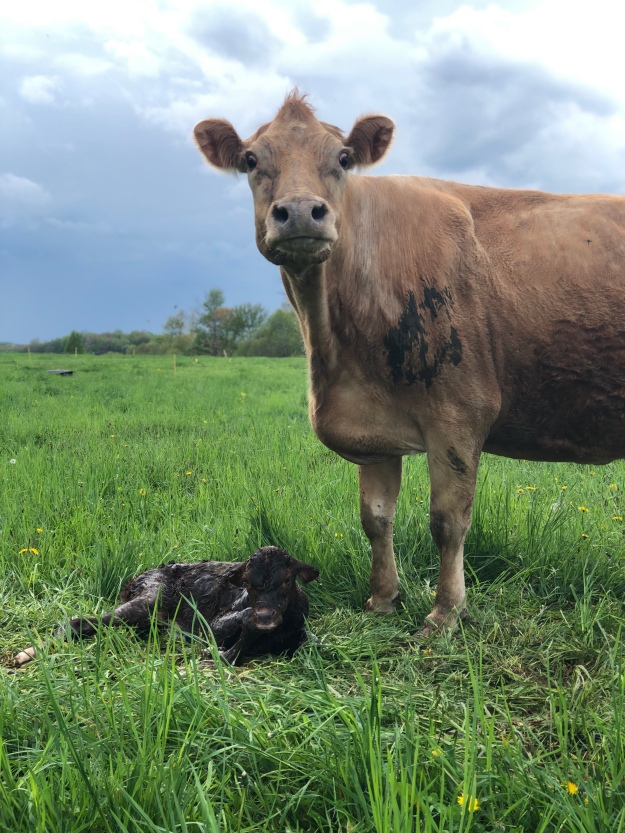 The rain was done & we had eaten, so we headed back up to check things out on the hill.

Both calves were pretty cleaned up, and it looked like they either had already eaten or were in the process of eating. 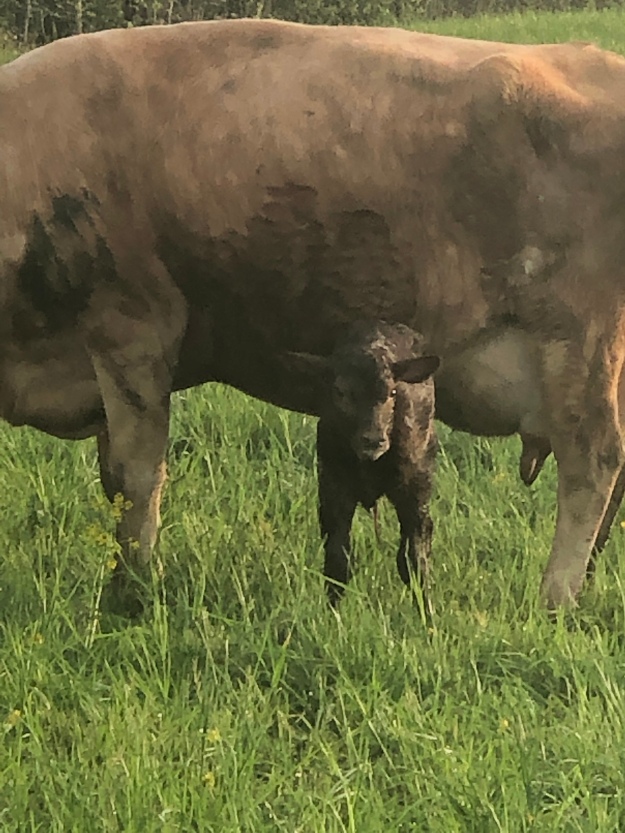 If you listen closely toward the end of the video, you can actually hear him sucking!❤️

We toyed with the idea of trying to get everybody down to the barn, but with only about an hour left of daylight, it would have meant that everyone would have needed to cooperate 100%. That was not happening, lol.🙄

After much prayer and deliberation, we decided to allow the boys to stay with their moms for the night. With the sun going down quickly and our bodies feeling weary, we felt it would be better to bring everybody down in the morning instead. This concept is scary for us control-freak-types…😬 In this field, the herd is contained in just a single wire of electric, and there is no perimeter fence around the edges.🙏🏼

Mike decided to add some kelp and DE to the girls’ mineral feeder in hopes of diverting their attention from the two new additions. Perhaps then the calves could bond more with their mamas in peace.😉

First Mike allowed Peggy to try some to see if it would entice her to get more. It worked! Didn’t take long for others to follow her.👏🏼 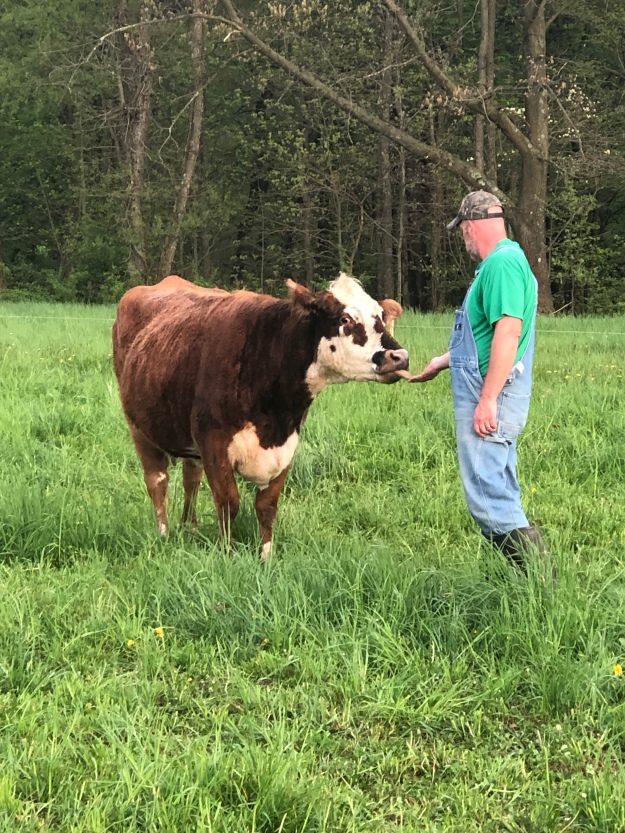 Of course, extra attention was needed, too…😏 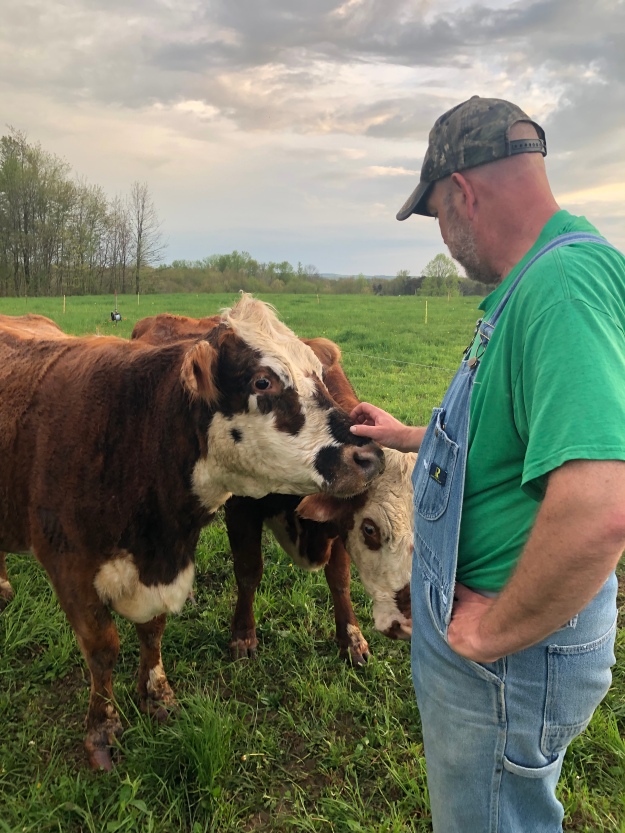 It was such a beautiful evening.❤️

Sure enough – BOTH calves were on the WRONG SIDE of the fence when we got up there this morning, lol.🙄 We don’t think it had been for too long, though. They were quite happy to be laying together. Sure did have all the moms in a tizzy in the corner!🤣

Boy-o and Jarjar were good about letting Mike & I get halters on them. That made it easy to get them back in with their moms.👍🏼 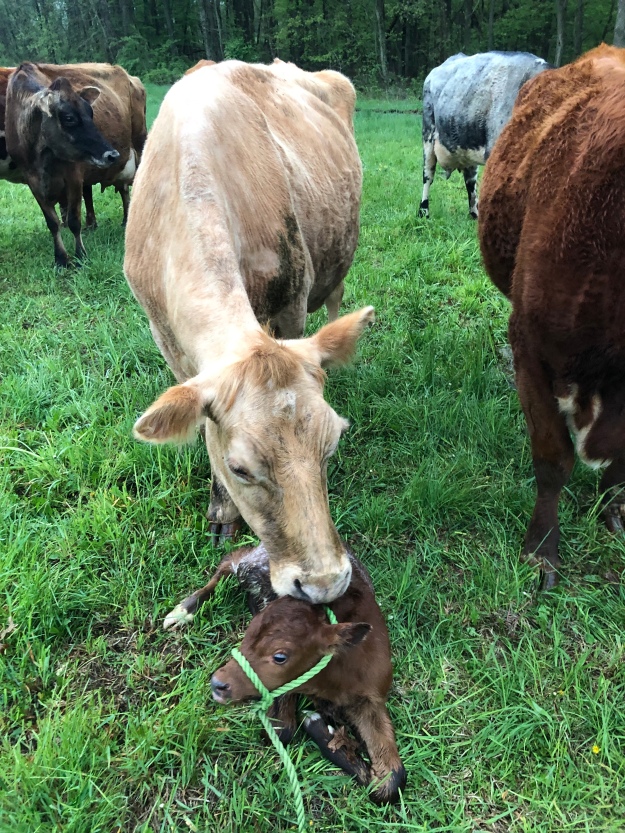 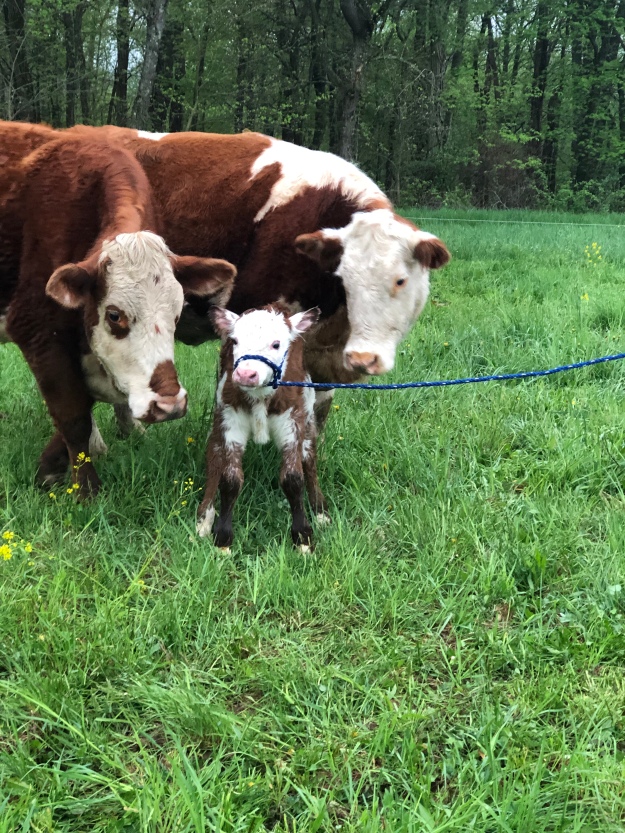 Next we wanted to start walking everybody down to the barn as usual. This is when we realized it would be nice to have an extra set of hands to help. Fortunately, Michael hadn’t left for work yet, and was able to join us for this fun.😉

Mike had Boy-o, and they started walking with Ruby the direction we wanted. Gluey wanted to follow, but it took a bit for her to convince Jarjar to join her… 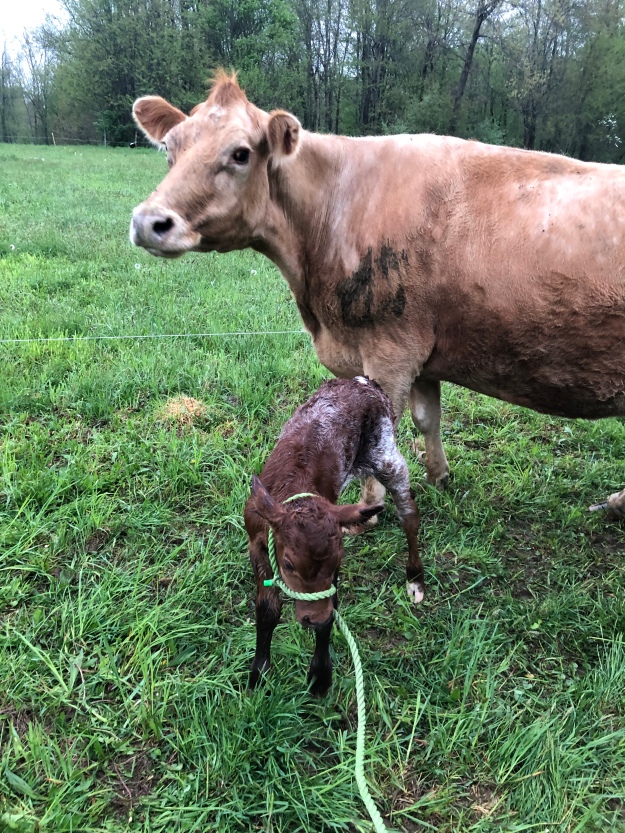 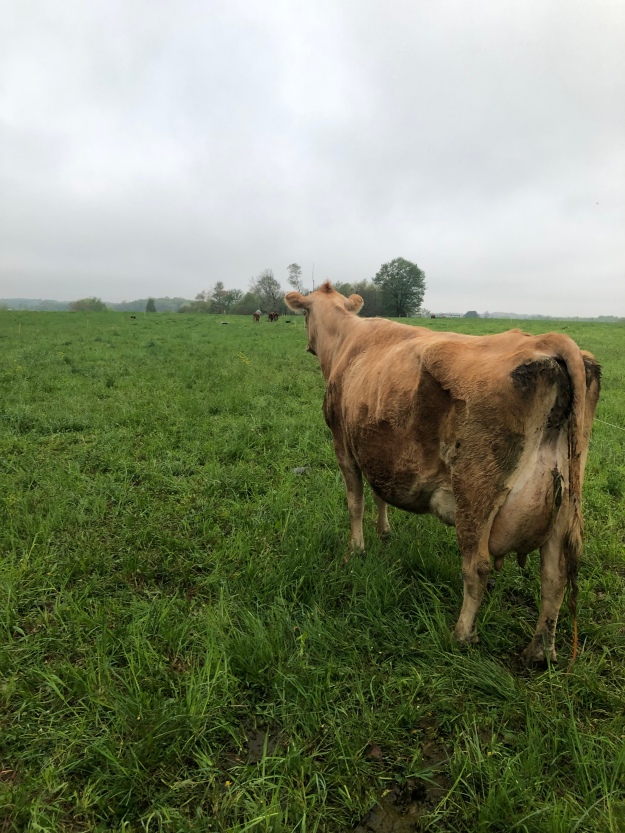 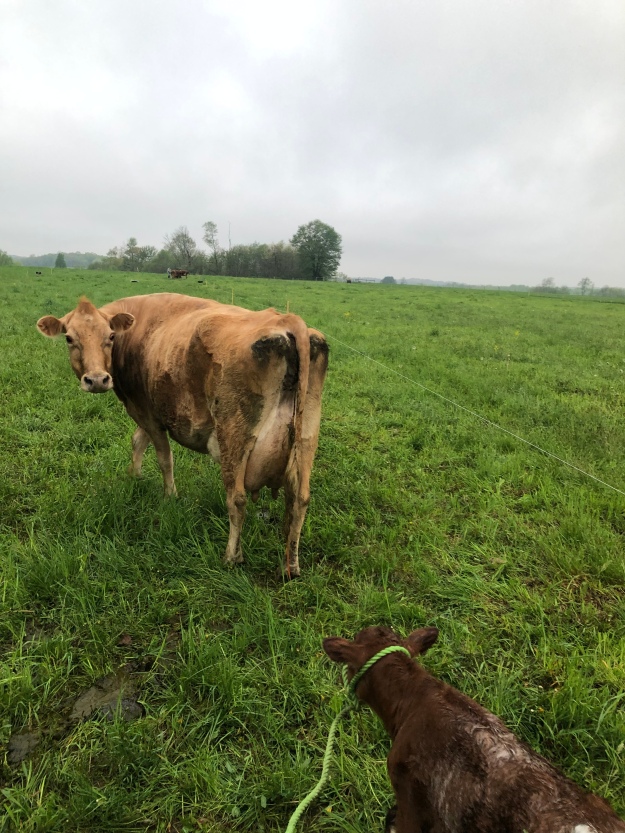 Amidst this drama, Ruby ended up leaving Boy-o and coming back to meet up with me, Gluey, & Jarjar.🙄 Mike was able to walk Boy-o to a fencepost and tied him there until we could get back to him. 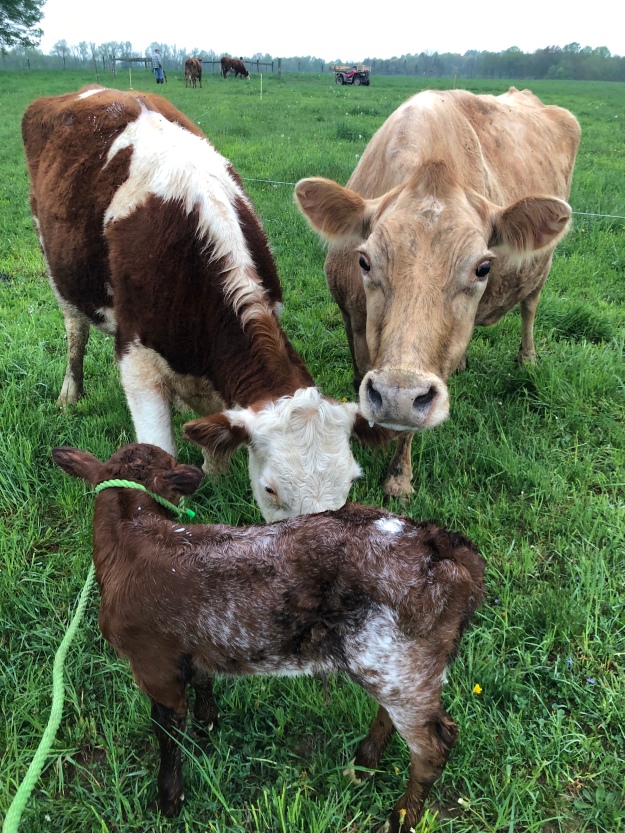 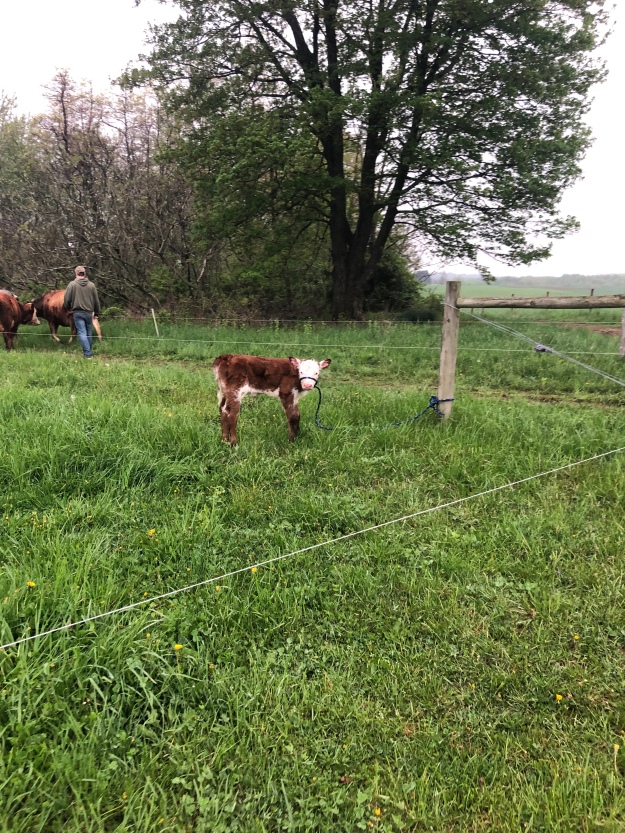 Then Mike took Jarjar from me, and walked him with Gluey & Ruby toward the barn. At this point, BOTH mamas thought Jarjar was their calf, lol.🙄

Michael & I were ahead of them and walked the remainder of the herd down to the barn.

Once we got them in the barn, Michael headed back out to join Mike with Boy-o and his two mamas.😆

It wasn’t long, and Boy-o was really losing his steam, so Michael volunteered to carry him the rest of the way down the runway. Mike was overjoyed to allow Michael to do that!😏💪🏼 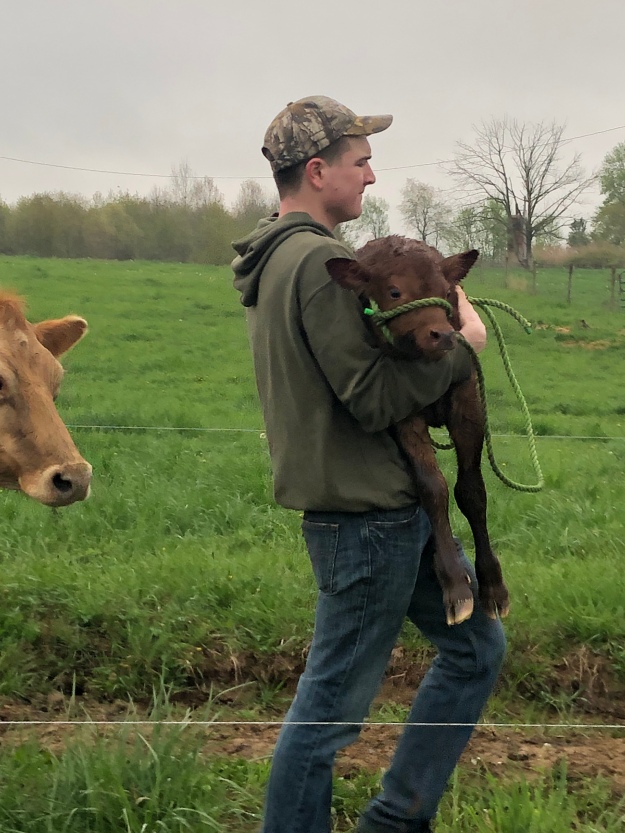 We were so grateful for Michael’s help this morning! What a blessing that Don’s Custom Meats is so close to our home, so he wasn’t too late getting into work.❤️

Mike was then able to walk Jarjar to his stall in the barn.👍🏼

Next, Mike & I headed back up to where Boy-o was waiting. He basically informed us he was DONE walking, lol.🙄

Mike prepped the 4-wheeler for the trek down the runway… 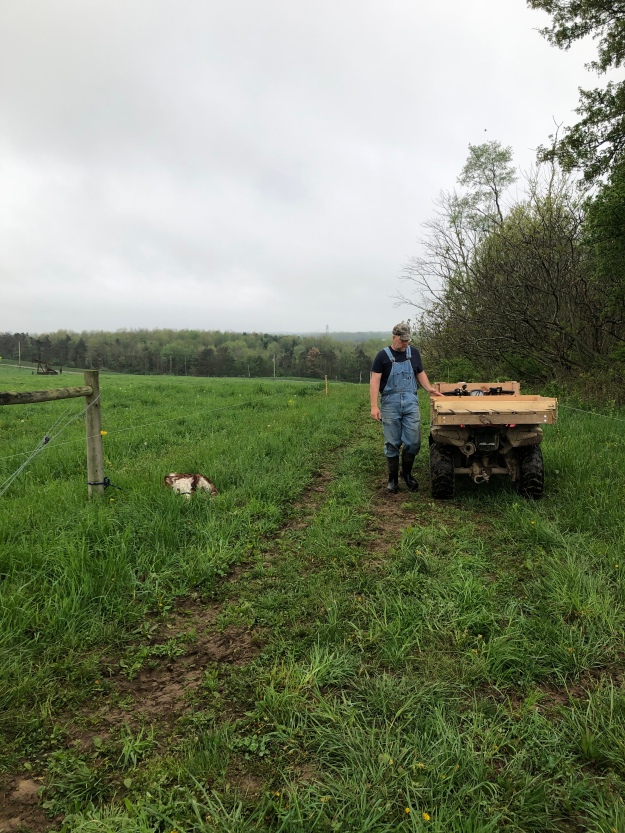 He scooped up Boy-o and loaded him up. This is the pose I get when I’m supposed to be driving, but turn to take a QUICK picture, lol…😏 (Have I mentioned lately, that I LOVE this man? How in the world he can even put up with me, I will never understand…☺️)

Unlike Clint, Boy-o hardly moved at all in the drive down. It was a much more comfortable walk for Mike down the hill.👏🏼 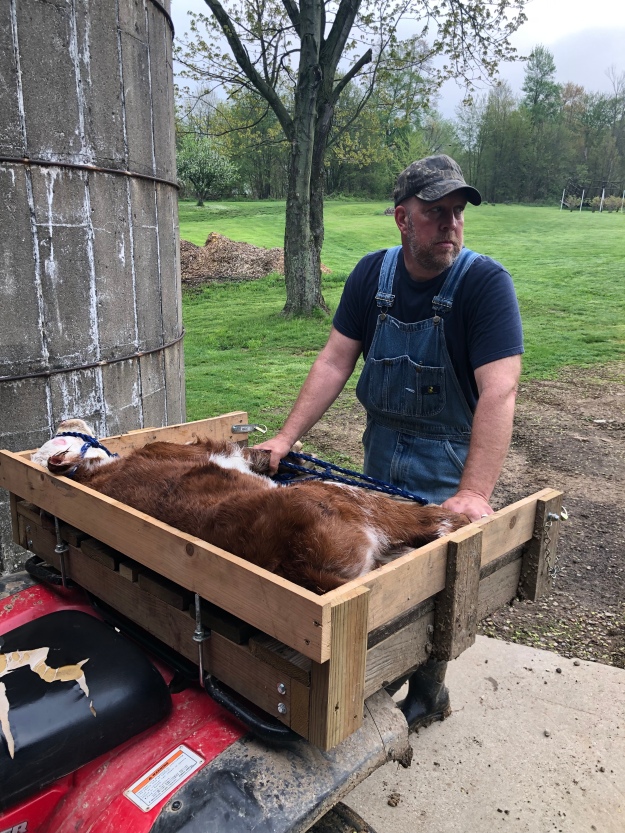 Mission accomplished! All the dairy girls were in the barn, and both calves made it to their pens. THANK YOU, LORD.✝️

We were also grateful that they both ate today. Sometimes, when they’ve been with their mamas for a decent spell, they aren’t interested in eating from a bottle for awhile. But these guys drained their bottles. ANOTHER PRAISE!✝️

Phew. What a long two days. I don’t think it’s ever taken me so long to write a blog post and get it uploaded!

What a season this has been, Lord. We’ve already learned many new lessons, and we know more are coming. We thank You for how You lead and teach us, and even how you gently correct us. We continue to seek Your Wisdom now as we move forward. With the Psalmist, we pray: May the favor of the Lord our God rest upon us; establish the work of our hands for us – YES, establish the work of our hands! Amen (Psalm 90:17)