My Grandma Cegelka taught me the basics of crocheting when I was a young girl.

I guess I’m kinda self-taught on the rest. (Which would explain why I only JUST discovered last year at age 39 that what I thought all these years was a single crochet was actually a double crochet… Makes sense why all my projects always ended up way larger than the pattern said they should, lol!) 🙂

Something I started when our oldest son turned 13 in 2012, was to memorize Scripture as I worked on his gift. I wanted to make him a blanket for a child in his future. It could be for his own child someday or it could be for a child he meets who needs a blanket…his choice. I wrote him a poem/note explaining the idea, allowed him to pick a pattern out from my library of crochet books, and we went together to pick out the yarn. He chose a variegated camouflage & black, which I thought was HILARIOUS! I memorized Matthew 13:1-23 (Parable & explanation of the Four Soils). As I worked, those verses have been prayed both for Michael & this future child. It’s packaged in a box under his bed, waiting to cuddle its new owner. 🙂

It was one of the most Spirit-filled experiences I’ve ever had. 🙂 HIGHLY recommend pray crocheting…

Memorized/prayed the words to the hymn: “There is Power in the Blood” (or “Would you be free from your burden of sin”) for this blanket’s owner/family.

For this next blanket, I let the individual colors lead me to a verse. While I used that color, I prayed that verse for the recipient. 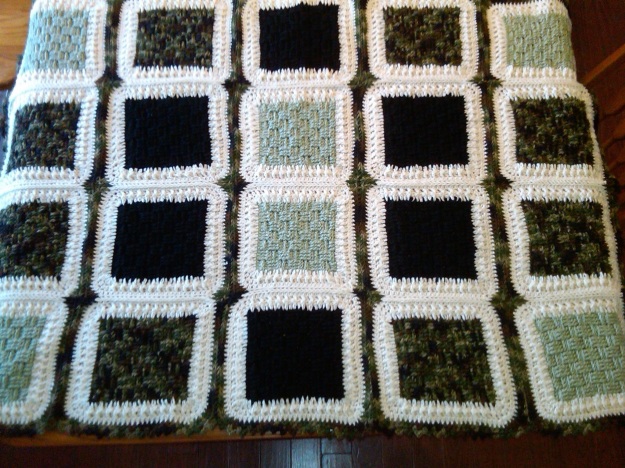 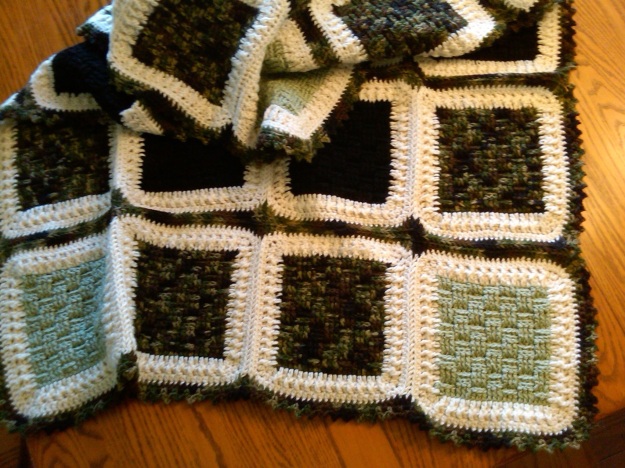 Now I’m working on Paul’s blanket since he turns 13 in August. He picked out just one color – a lighter shade of variegated camouflage. I’ll add pics when I’m done… I am reviewing/praying Matthew 13:1-23 like I did for Michael above, and then tackling the rest of Matthew 13, too. (Parable & explanation of the Weeds, Parables of the Mustard Seed, Yeast, Hidden Treasure, Pearl Merchant, Fishing Net, & The People of Nazareth Refuse to Believe)