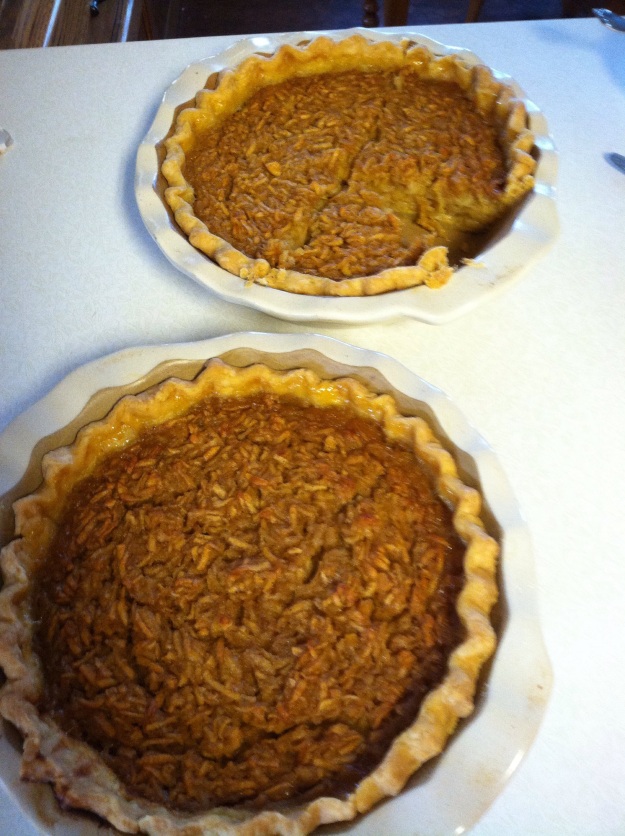 Apple pie with big chunks of apple are not a big hit here… But last year a friend brought Mike a SHREDDED apple & pear pie – and we loved it! 🙂

So when my Dad gifted me two big boxes of apples and pears a couple weeks ago, I knew I needed to reserve some to try to re-create that pie. Mmmmm… 🙂

Here’s my recipe for two pies:

2 pounds of apples & 2 pounds of pears. [Peeled, cored, and shredded – which yielded about 8 cups of shredded fruit.]

I let it sit while I made my pie crust:

With a pastry blender, mix up 2c KAUF (242g) with 1t (7g) sea salt and 3/4c (156g) mostly solid coconut oil or cold butter. Once uniform crumbles are achieved, I add 5T cold water & incorporate it with the pastry blender. Then I use my hands & form 2 balls. After letting it rest a couple minutes, I roll each dough-ball out on a floured lint-free towel, line my stoneware pie pans, and flute the edges between my fingers.

Then I added half the previously prepared pie filling on top of each pie crust.

We TRIED to allow it to cool completely before sampling it, but we failed, lol. 🙂

We have kept them in the fridge, and they taste great cold, too! 🙂